Today I'd like to share the work of 3 of my customers.  They spent the day at our Paper Picnic on Saturday making cards.  I was so impressed I just had to share with you all.

These Christmas cards were created by Sue Kennedy using her trusty Cricut and lots of Glitter Paper.  I love the simplicity of the cards - letting the shimmery goodness of the paper do all the work.  One technique Sue tried was stamping in Black Archival Ink onto the Glitter Paper - doesn't it look great?  Glitter Paper is a…

I have thoroughly enjoyed using the Brushed Workshop on the Go Kit and only had a few odds and ends left over but I had one more layout I wanted to create for my overlays workshop.  I'm happy with the way it turned out.

The overlay is cut using the Artbooking Cartridge on the Cricut.  I set mine at 5" high which made each vertical band 1 1/4" wide.  Simply cut strips of patterned paper to add interest behind the overlay.

I love my Cricut machine!  I'm not sure how I scrapbooked without it.  Today's layout features an overlay cut from the Artbooking cartridge.  You'll find it on page 64 of the Artbooking booklet.

I had a lot of fun filling the holes with papers from the Brushed paper Pack.  The stamped title uses 3 different stamp fonts and 3 ink colours.  Ink entire title in lightest colour then daub the medium and darkest colour around edges.

OK, it's official!  The Artfully Sent Cricut Cartridge is my new favourite tool.  It makes card making so quick and easy.  Here's a card I made using mostly scraps.

The design is already on the cartridge.  All I had to do was load my paper into the machine and press 'Cut'.  I was doing a few for my team members so I ended up with lots of lovely butterfly die-cuts in different shades of blue which I plan to use on a page later.

Once the base card is cut, use the die cut butterflies to guide your cu…

One of the things I love about being a consultant with Close To My Heart is the active sharing of ideas between consultants.  It is rare for me to have to think something up myself - so many really creative ladies make amazing things and show the rest of us how it's done.

Take these fabulous Christmas gift tubes for instance.  These ones were made by Katrina Crute, a consultant in my team.  She showed them off at this month's team play day.  Her inspiration had come from consultants in the Easter…

Welcome to October's Australasian Stamp of the Month Blog Hop.  We have all been creating with the Home for the Holidays stamp set.  If you arrived here from Jo's Blog you are in the right spot.  If you happened upon us accidently, WELCOME to the hop.  Once you’ve checked out my post you can click on the link at the bottom to the next blog on the tour.  Eventually you’ll end up back here.  Enjoy!

When my sister, Rhonda,  and I were young our family's favourite TV show on Sunday Night was called, "Ask the Leyland Brothers"  It screened between 1976 and 1980, covering 153 episodes. The series followed the Leyland brothers, Mike and Mal, who traveled across Australia and New Zealand in response to questions posed by viewers.  Mike and Mal were slow talking Aussies who had awesome adventures with their wives and children.

Once I had my driver's license, Rhonda and I would head off for short b…

Whilst visiting California Adventure we came across Goofy conducting an imaginary orchestra.  He was very funny and then I realised the fountains behind him were synchronised with the music.  Very cool.  I just had to dedicate a page to his antics. 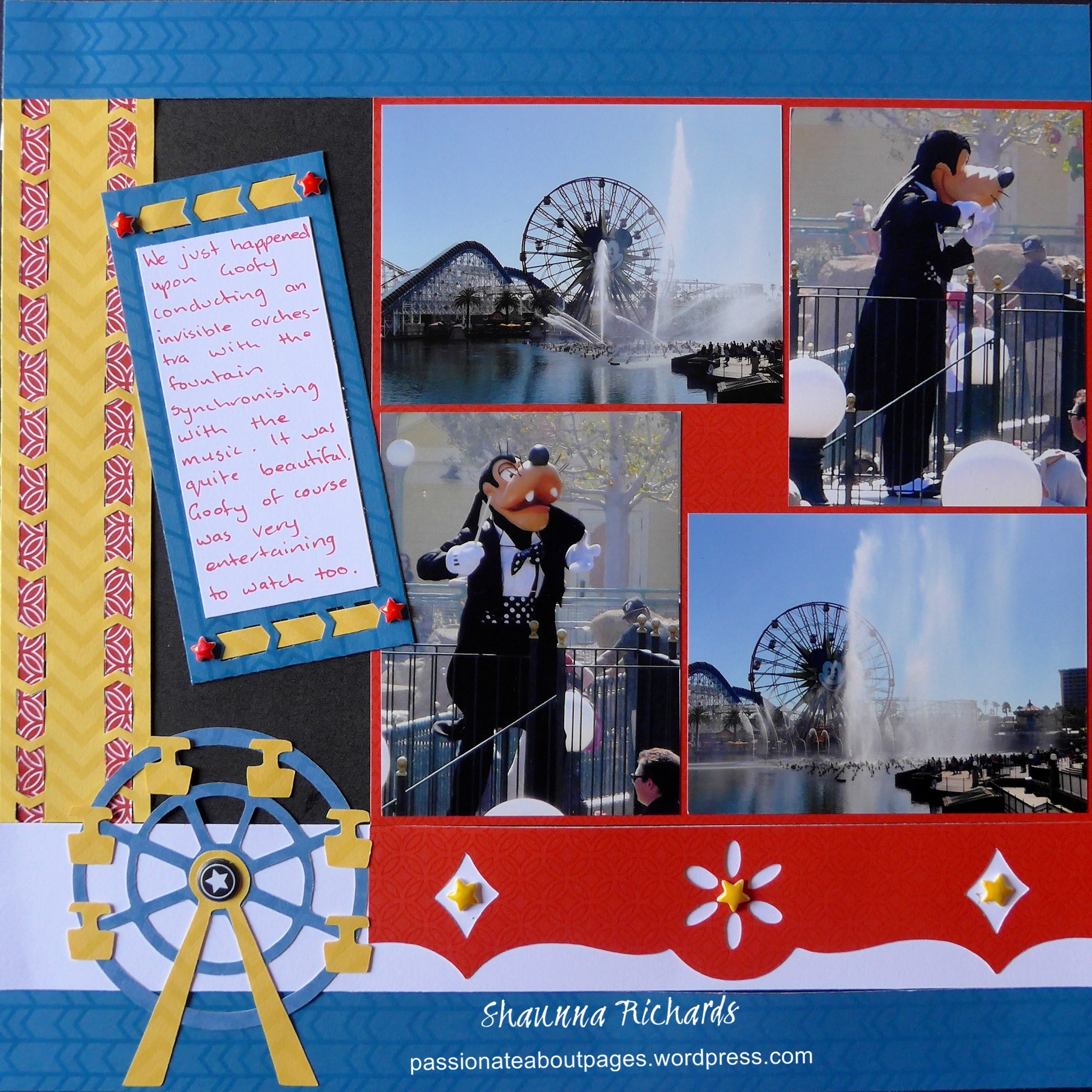 This layout is based on one called, appropriately, "Performance".  You will find it on p48 of the CTMH Magic How To book. (9040) The papers are this month's featured collection - Paper Fundamentals and these colours come from the Adventure Assortment…

Have you ever read or heard the story of 'Warm Fuzzies'?  When I was a teacher I would read this story to my class and have everyone decorate a paper bag with pictures & words relating to their personality.  Througout the day, other students would write a small note of encouragement or affirmation and secretly slip it into the bag. This was a "Warm Fuzzy".  You should have seen the delight on their faces when their bag had a warm fuzzy in it.  The kids would go out of their way to see good thing…

Today's post features some beautiful cards made by my team members and colleagues for last weekends product launch.  They are sure to get your creative juices flowing.  I'm on a mission to encourage more people to create and mail handmade cards 'Just Because' they can.  We only receive dreary bills and statements in our letterboxes these days.  Let's brighten someone else's day by writing a card and posting.  I'd love to hear how your friends and family react when they receive them.